The analysis of particulate carbon is carried out at the Laboratoire d’Aerologie (LA) using thermo-optical methods.

Three different methods exist for mesuring the mass of carbon present on a filter, all of which differentiate between the Organic Carbon (OC) and Black Carbon (BC) components. All three methods, thermic, optical and thermo-optical rely on the physical properties of carbonaceous aerosol. The optical method makes use of the black body properties of BC, whilst the thermal method makes use of the refractory characteristics of BC. 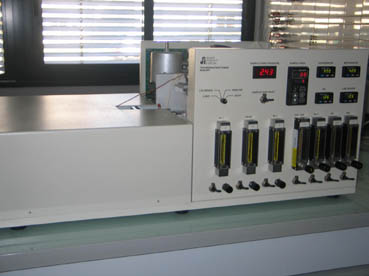 The IMPROVE thermo-optical method is used at the LA. The IMPROVE method – Interagency Monitoring of PROtected Visual Environments (Fung et al., 2002) – makes use of the fact that BC and OC volatilise at different temperatures. The threshold temperatures used for BC/OC speciation are shown in the figure below (showing TOR – Thermo-Optical Reflectance).

We use cookies to guarantee you the best experience on our site, and to make statistics of attendance (Google Analytics). If you continue to use this site we will assume that you are happy with it.Ok